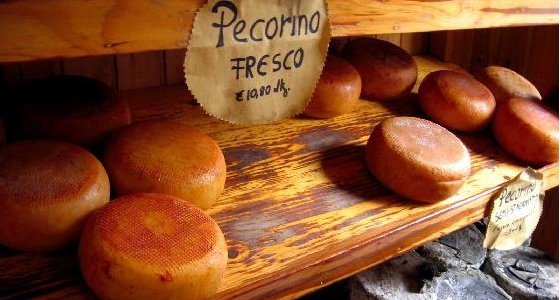 In Tuscany you will mostly come across Pecorino cheese instead of Parmesan cheese. Note that the two cheeses are made from different milk sources, Parmesan is made from cow’s milk, whereas Pecorino is made from ewe’s milk. In fact, the word “pecora” is Italian for “ewe”. Italians refer to Parmesan as “Parmigiano Reggiano”. Be aware of the textural and taste differences between the two types of cheese as each comes with its own texture and “ripeness”.

Parmesan is a fruity-flavoured cheese with a peppery after-taste. It tends to be sold at varying stages of ripeness, which impacts the strength of its taste but its texture usually remains the same, hard and grainy.

Pecorino is a sharp, salty-flavoured cheese. Pecorino tends to be most widely available after considerable ageing or ripening. Pecorino is hard like Parmesan and grates well. It is also possible to get a softer Pecorino which is where it can differ from Parmesan in texture. If you purchase fresher, younger Pecorino, you will discover that it is softer, with a lighter colouring and a texture similar to a firm Brie. It also tastes less strong.

There is a wide range of uses for the cheese, which varies according to local traditions and the season. The delicate flavour of a young pecorino Toscano can provide an excellent complement to salad-based starters. As the cheese matures and the flavour strengthens, it can be eaten with honey or jam, as well as with fresh vegetables or fruits (especially pears and figs). Well matured pecorino Toscano is widely used across Italy as an alternative to parmesan for grating over a wide range of dishes, especially pastas or soups.

Why book with us